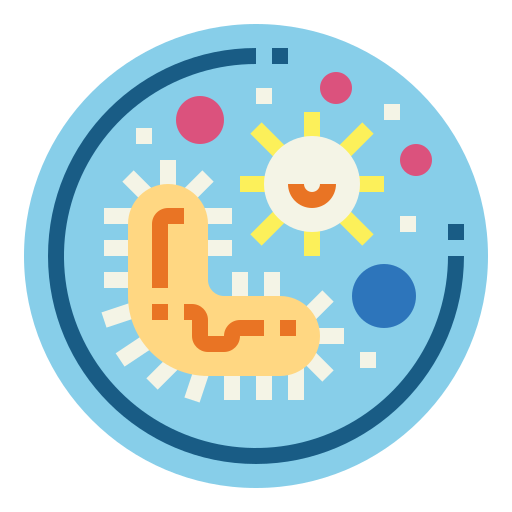 - Tick-borne pathogens are obvious triggers of Lyme disease, however there are additional pathogens that haven’t been in the limelight.

- One example is the opportunistic bacterium Acinetobacter, which, due to cross-reactivity with neurological tissues, has been shown to play a role in multiple sclerosis.

- Giardia lamblia is well known as a cause of watery diarrhea, but less known for persisting in asymptomatic patients where the pathogen destroys intestinal villa thereby preventing nutrient absorption. Giardia can then cross-react with structural proteins such as tubulin and actin, which then triggers autoimmunity of the joints.

Acinetobacter is a non-motile, gram-negative bacterium. Acinetobacter may cause infections of the lung, urinary tract, bloodstream or surgical wounds. Due to cross-reactivity with major neurological tissues, Acinetobacter has been shown to play a role in multiple sclerosis.

Aspergillus is the genus of asexual spore-forming mold species common in many climates. It is found in soil, water and air. Aspergillus fumigatus, Aspergillus niger and Aspergillus flavus are common molds to which humans are exposed.

Babesia is a tick-borne intraerythrocytic protozoan parasite, which can result in subclinical or mild illness in most cases, but occasionally, in immunocompromised individuals, the reaction can be severe.

Blastocystis hominis (B. hominis) is a unicellular protozoan found in the large intestine of humans. B. hominis is the most prevalent single-celled eukaryotic organism found in humans. It is a causative pathogen in irritable bowel disorders and the toxins released by B. hominis can contribute to fibromyalgia. This presence of B. hominis-specific immunoglobulins in the serum samples suggests that the immune action against this parasite is not limited to the intestinal level. Antibodies to the pathogen can be found in both symptomatic and asymptomatic individuals, therefore, it is still unclear whether B. hominis is a truly pathogenic organism, or a commensal, or perhaps, is capable of being a pathogen in specific circumstances.

C. jejuni is a gram-negative bacterium that causes severe gastroenteritis. Due to C. jejuni’s ability to produce lipoligosaccharides, the bacteria are able to invade intestinal epithelial cells. Beyond the gut wall, C. jejuni has been implicated in disorders such as arthritis and Guillain-Barré syndrome. The severity of these disorders makes C. jejuni an important environmental trigger to assess while working up certain autoimmune patients.

C. albicans is a human commensal yeast. By penetrating the intestinal barrier this pathogen is able to thrive in the human host. Its inflammatory effect in the gastrointestinal tract opens the intestinal barrier, putting tissue and organs at risk for autoimmunity. Candida has been shown to crossreact with a variety of human tissues and thus, when Candida or its antigens reach the blood stream, the antibodies produced against it may turn on self-tissue proteins. The end result can be autoimmunity.

Chlamydias are obligate intracellular pathogens. Chlamydia pneumoniae (C. pneumoniae) is a human pathogen that infects the respiratory tract and is responsible for some cases of communityacquired pneumonia.

Epstein-Barr virus (EBV), or herpes type IV, is a DNA virus composed of linear double stranded DNA genome enclosed by a capsid and membrane derived envelope made from a variety of glycoproteins.

C. difficile is the leading cause of antibiotic-associated nosocomial diarrhea and colitis in the industrialized world. This gram-positive bacterium can reside in the human host without triggering serious clinical conditions, however, when the colonized bacteria produce toxin A and toxin B, the resulting changes in gastrointestinal pH and cytoskeletal structures of the barrier, serious disorders can occur. Pathogenic C. difficile has been linked to colitis, irritable bowel disease and liver disorders.

C. parvum is a protozoan parasite that can cause gastrointestinal illness with diarrhea in humans. Through various mechanisms the parasite can manipulate the host cytoskeleton proteins, including rearranging tropomyosin-5 protein, actinin, villin, ezrin, at the site of infection. This restructuring of proteins allows the parasite to infiltrate intestinal cells. Due to antigenic similarity between C. parvum, actin and tropomyosin structures, these antibodies may cross-react with human tissues resulting in autoimmunity associated with parasitic infections.

G. lamblia is a flagellated protozoan parasite that colonizes and reproduces in the small intestine. G. lamblia causes giardiasis. Giardiasis does not spread via the bloodstream, nor does it spread to other parts of the gastrointestinal tract. Giardiasis remains in the lumen of the small intestine. Chronic infection with Giardia may abate and the patient could become asymptomatic. Asymptomatic individuals may become reservoirs for spreading the infection. Antibodies against G. lamblia may cross-react with human tissue antigens such as tubulin, actin, actinin, tropomyosin and others. The end result may be autoimmunity against those tissues.

H. pylori, a gram-negative bacterium colonizes the gastrointestinal system, where is interferes with intestinal barrier functions, induces inflammatory responses and can contribute to autoimmunity. Mechanisms of autoimmunity include molecular mimicry, polyclonal activation, epitope spreading, bystander activation and super antigen release. H. pylori has been implicated in disorders of the thyroid, liver, joints and nervous system.

Heat shock protein 60 (HSP60) is a mitochondrial chaperonin that plays a role in the transportation and refolding of proteins from the cytoplasm into the mitochondrial matrix.

Mycobacterium avium (M. avium) is a gram-positive, slow-growing bacteria with high guanine and cytosine content. It is present mainly in cattle and transmitted to humans by drinking unpasteurized animal milk. M. avium, M. bovis and M. tuberculosis are the most common human acquired mycobacteria.

Mycoplasma refers to a genus of bacteria that lack a cell wall, which makes them immune to common antibiotics such as penicillin. Mycoplasma pneumoniae, Mycoplasma arthritidis and ureaplasma are common human pathogens.

Penicillium is a genus of fungi, which commonly grows on many foodstuffs such as cocoa beans, coffee beans, cassava flour, cereals, fish, peanuts, dried fruits, wine, poultry eggs and milk.

Oral bacterium P. gingivalis has been well-documented as a mediator of periodontal disease. Furthermore, hosts harboring this pathogen have been shown to have greater risk for rheumatoid arthritis. Researchers are elucidating the mechanisms by which P. gingivalis contributes to the pathogenesis of arthritic and their related disorders. Upregulation of intestinal lipopolysaccharides and subsequent inflammation, as well as citrullination of alpha-enolase, which shares homology with human tissue α-enolase, are described mechanisms of autoimmunity.

Rotavirus is a double-stranded RNA virus that is commonly associated with gastroenteritis in children. Repeated infections with rotavirus can lead to viral replication in intestinal cells. Changes in intestinal cells leads to intestinal barrier dysfunction, increased intestinal permeability and the easy translocation of environmental immunogens into circulation. Pathogenic rotavirus has been linked to various disorders such as Celiac disease and type 1 diabetes.

M Protein is an extracellular product of Streptococcus that contributes to the pathogenicity of the gram-positive bacterium.

S. mutans is a gram positive bacterium commonly found in the human oral cavity. It is known to promote dental caries. S. mutans has been shown to elicit inflammation by stimulating cytokine production in the dental pulp below caries. When this inflammation reaches the intestines, it can contribute to dysbiosis, breakdown of intestinal barrier structures and the infiltration of S. mutans immunogens into circulation. Antibodies against S. mutans have long been recognized as cross-reactive to human heart tissues and thus, suspected of playing a role in heart disorders.

Y. enterocolitica is a gram-negative, bacillus-shaped bacterium. Y. entrocolitica can be short-lived as an infection. However, even if the infection is treated successfully, due to the action of various bacterial toxins and mimicry with human tissue, continued immune responses against these toxins may result in various inflammatory and autoimmune disorders, such as inflammatory bowel disease, autoimmune thyroid disease, uveitis, Lyme-associated disorders and even reactive arthritis.